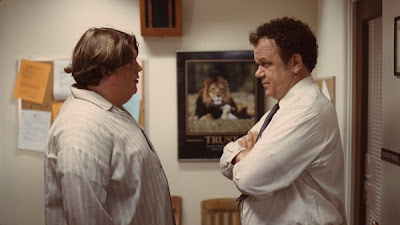 Terri is an overweight 15 year old who lives with his demented uncle in the woods near the marsh. Routinely picked on by kids at school, he wears pajamas to class because they’re comfortable, and is constantly tardy, lately due to his growing fascination with killing field mice and offering them up as a meal to a hawk. His behavior causes concern for his principal, so Terri is thrown into a group of school misfits who must meet with him on a weekly basis for counseling. Although apathetic at first, Terri forms a friendship with his principal, and a more unlikely friendship develops when he comes to the aid of a beautiful but troubled classmate.
“Terri” is an offbeat independent comedy that serves as both a tale of a loner as well as a slice of life film. Directed by Azazel Jacobs and written with Patrick DeWitt, the movie is warm and unconventional, containing sharply drawn characters who seem like authentic people. I was surprised by much care and detail had been given to not just the main characters but also to background players who would usually go unremembered in most movies.
The performances are wonderful as well. As Terri, Jacob Wysocki is a real find and must portray a wide range of emotions that his laconic character goes through. It is a difficult performance and he does a great job of pulling it off. I just hope there are more roles to come because he is not exactly a Hollywood type.
John C. Reilly turns in excellent, award caliber work as well. I think people often forget what a gifted actor he really is due to the silly nature of some of the roles he takes. Here, the chummy principal is a somewhat goofy concoction, but there is so much depth to the role that I have a hard time picturing anyone else portraying it just as fine.
I did have one problem with the movie: an extended scene where Terri, a friend, and the girl he has a crush on pop pills and get drunk in his uncle’s basement went on too long and ran counter to the tone the film had set up until that point. I also did not buy some of the character’s choices in that scene. Still this is a warmhearted and sharply observed film, and in an industry where movie characters come straight off of the assembly line, here is a movie whose characters have been handled with care.