Call Me by Your Name

At their summer home in Northern Italy, a precocious 17 year old musical prodigy (Timothee Chalamet) sees the arrival of his archaeologist father's (Michael Stuhlbarg) latest research assistant (Armie Hammer) and the two develop a bond that segues into a passionate physical relationship. Luca Guadagnino's realization of James Ivory's script (from a novel by Andre Aciman) is idyllically set and beautifully shot yet frustrating in an unambiguous way that never really lets you in as to what's going on and what the characters are feeling, leaving the central relationship seeming unworthy of the weight subscribed to it. Chalamet's touted performance is offbeat and unique but inconsistent and aloof.
** 1/2 out of **** 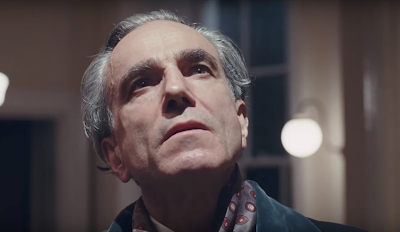 A renowned, particular, and impatient London dress designer (Daniel Day-Lewis) in the 1950s grows annoyed with and dismisses his current lover before a strong willed, foreign born waitress (Vicky Krieps) catches his eye and takes her place, becoming muse and model while forging a toxic, codependent relationship and butting heads with his watchful, protective sister (Leslie Manville). P.T. Anderson's Phantom Thread, a beautifully shot, fascinating look into a sequestered world and life, is slow to start before becoming severely strange and ultimately deeply involving. It features another, (said to be his final) consummate performance from DDL and another acute, obsessive and slightly inhuman characterization. Krieps is magnetic, holding her own with her intimidating partner and Manville exhibits great control and subtle humor in an Oscar nominated performance.
*** 1/2 out of **** 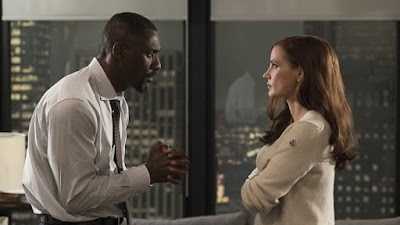 A skier (Jessica Chastain) with issues with her psychiatrist father (Kevin Costner), who came up just short of medalling in the Olympics due to a devastating injury, relocates to L.A. and soon finds herself assisting and then running her own high stakes poker games before becoming involved with the Russian mob, catching a RICO charge, and trying to convince a clean cut, high powered attorney (Idris Elba) to represent her in federal court. Aaron Sorkin's approach in his directorial debut never really elevates the screenplay which contains the expected witty Sorkinisms but is overly relentless and bloated, with an unfortuante climactic scene featuring Costner at a skating rink. Chastain's performance is commanding as is Elba in a supporting role, especially during a lenghthy, late arriving speech.
*** out of ****

All the Money in the World 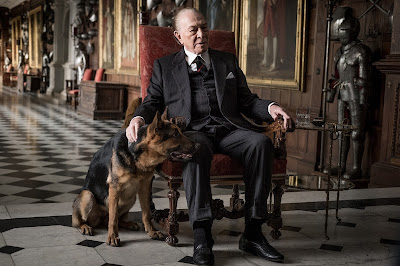 Oil magnate and world's richest man J. Paul Getty (Christopher Plummer) refuses to pay the $17 million ransom of his kidnapped grandson, after he was abducted while living in Italy, instead opting to put an ex-CIA agent (Mark Wahlberg) on the case who teams up with the boy's persistent and grief stricken mother (Michelle Williams). Ridley Scott's All the Money in the World is an intelligent and solidly crafted if a little overlong thriller, unnerving in doses, with a delicious performance from Christopher Plummer who famously joined the cast in the 11th hour after Kevin Spacey was scrubbed from the picture. Wahlberg is welcomely subdued and Williams contributes another excellent, overlooked turn.
*** 1/2 out of ****

The Ghost and Mrs. Muir 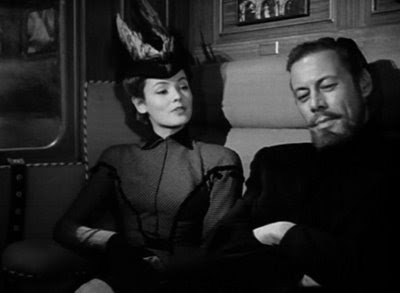 Feeling trapped by her autocratic mother and sister, a young widow (Gene Tierney) longs to be on her own and jumps at the chance to rent a seaside cottage, even after being forewarned that it is haunted by the ghost of a surly sea captain (Rex Harrison) who met an untimely demise. Joseph L. Mankiewicz's The Ghost and Mrs. Muir strikes too light a tone before suddenly changing gears and turning somber. Tierney is consistent, Harrison's performance is grating at times and appealing at others, and George Sanders has a memorable supporting role. The black and white cinematography is exquisite.
** 1/2 out of ****

Diary of a Lost Girl 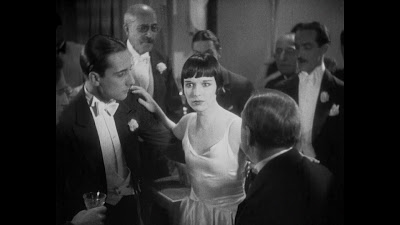 The daughter (Louise Brooks) of a pharmacist is raped by her father's assistant and is sent away to a medieval reformatory and then a whorehouse before receiving her inheritance and achieving her belated redemption. Daring and still ribald, G.W. Pabst's Diary of a Lost Girl is consummately directed (the reformatory scenes are virtuosic) with impeccable black and white cinematography and a surprising lack of intertitles.A beautiful Brooks commands out sympathy.
*** 1/2 out of **** 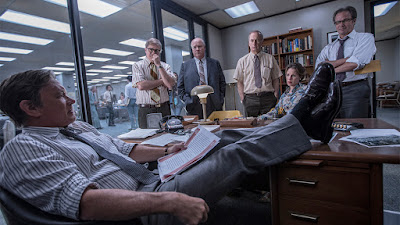 When government contractor Daniel Ellsberg (Matthew Rhys) witnesses the perpetual standstill in Vietnam followed by a knowing Robert McNamara (Bruce Greenwood) still selling the war to the public, he decides to steal a lengthy top secret document, later to be known as the Pentagon Papers, which was a study of the war that revealed a decades long awareness and deceitfulness regarding the hopelessness of the conflict. When these papers were published by the New York Times, they were hit with a temporary injunction by the Nixon White House, leaving the door open for the then regional Washington Post and their tenacious editor-in-chief Ben Bradlee (Tom Hanks) and his team to find the source and publish the remaining documents, just at the same time their owner Katharine Graham (Meryl Streep) is taking the paper public. Steven Spielberg's The Post seems to be stretching its story farther than it wants to go with a deficient, hokey screenplay that doesn't have a whole lot to say beyond first amendment power of the press rhetoric and barely veiled references to the current administration. Its become well known how quick the movie was assembled, shot, and edited and that rushed feeling shows in the final, forgettable product. Also, Spielberg appears to be attempting an unnatural style of directing outside of his ouevre. Hanks is miscast as the hard-nosed Bradlee and only calls to memory a superior Jason Robards portrayal of the newsman in All the President's Men. Streep, however, is appealing as the softspoken, underestimated newspaper magnate. A well-recognizable cast fails to leave an impression.
** out of ****

Email ThisBlogThis!Share to TwitterShare to FacebookShare to Pinterest
Labels: **, 2017, Spielberg 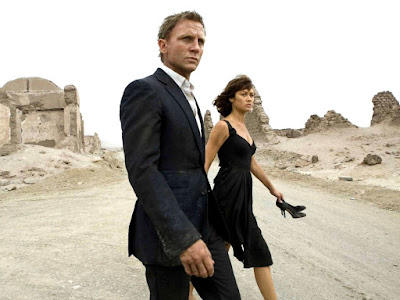 While trying to corner the members of the shadowy organization responsible for Vesper's death, James (Daniel Craig) crosses paths with a beautiful secret agent (Olga Kuryleko) acting as a mistress to a ruthless entrepreneur (Mathieu Amalric) seeking to corner the Bolivian water market. Dominated by overblown kinetic action sequences in vogue a decade ago a la Jason Bourne, Quantum of Solace is lazily written which lends itself to a hard to follow 007 entry that clumsily follows up on storylines from Casino Royale, its superior predecessor. However, it doesn't overstay its welcome like many films in the series and contains a malignant villain in Amalric and one of the most stunning Bond girls in Kurylenko.
** 1/2 out of ****

Email ThisBlogThis!Share to TwitterShare to FacebookShare to Pinterest
Labels: ** 1/2, 2008, Bond 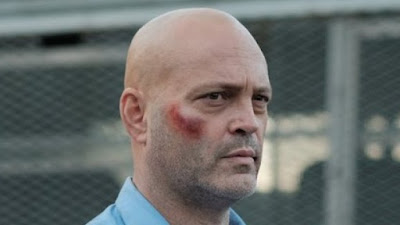 A tow truck driver (Vince Vaughn) with a vaguely explained violent past loses his job only to discover his wife (Jennifer Carpenter) is having an affair. They soon patch things up, and he begins drug running for a friend, a gig that quickly lands him a seven year stint in prison. When his now pregnant wife is kidnapped, he is extorted into fighting his way into the state maximum security unit and offing a prisoner wanted dead by her captors. Brawl in Cell Block 99 takes forever to get going and the dialogue is incredibly vacuous but the film becomes completely engrossing, in the same fashion as writer/director S. Craig Zahler's Bone Tomahawk did while sill relishing in the ever increasing, incessant violence. Vaughn delivers a commanding and empathetic performance and Don Johnson has a great walk-on role on a sadistic, no-nonsense prison warden.
** 1/2 out of **** 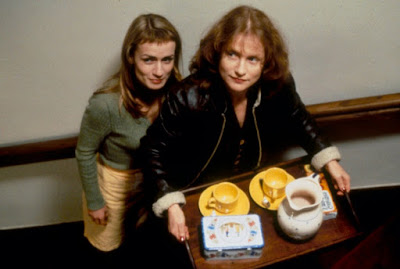 A maid (Sandrine Bonnaire) concealing an illiteracy problem and a violent incident in her past goes to work for a benign, bourgeois family (headed by Jacqueline Bisset and Jean-Pierre Cassel) and befriends an unstable local postal clerk (Isabelle Huppert) also with skeletons in her closet, a relationship rooted in pseudo lesbianism and class jealousy that devolves into mayhem. Claude Chabrol's La Cérémonie is a cold-blooded class conflict movie, slow-paced, involving, and ultimately harrowing. The cast, especially Bisset, is exceptional.
*** 1/2 out of **** 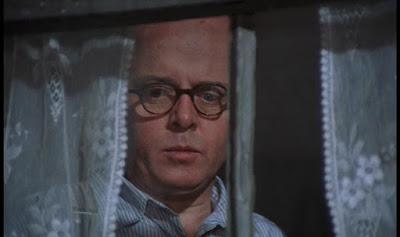 From a true crime story about an achingly terrifying miscarriage of justice, middle-aged serial killer John Christie (Richard Attenborough) lives an unassuming life with his wife in their quiet London flat when he decides to rent the adjoining property to an illiterate laborer (John Hurt), along with his wife and infant child, who will soon face the hangman’s noose for one of his landlord’s unspeakable crimes. Filmed just doors down from the site of the actual killings, Richard Fleisher’s 10 Rillington Place is bleak, muted, and understated with Attenborough creepily effective and Hurt totally credible in the tragic role.
*** out of ****

Email ThisBlogThis!Share to TwitterShare to FacebookShare to Pinterest
Labels: ***, 1971 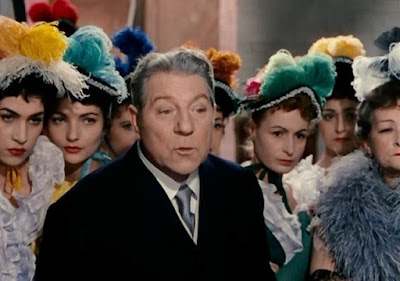 An impressario (Jean Gabin) engages in romantic entanglements with his main drawing act (Maria Felix), a new discovery (Francois Arnoul) and two of her lovers while reintroducing the can-can, an outdated dance number, and opening what would come to be known as the Moulin Rouge. One of Jean Renoir's post American exile works, French Cancan is dominated by cheesy French humor and underdrawn characters, though Gabin's performance is winning and the dance numbers, the finale in particular, are spectacular.
*** out of ****

A fallen ronin (Tatsuya Nakadai) who has lost everything, namely master, livelihood, and family, arrives at a lord's residence in order to commit seppuku, a ritual form of suicide. In an attempt to deter his actions, he is told of another recent samurai who made a similar request and was forced to carry out his demand, as he was suspected of attempting to fleece the manor by being turned away with riches. Instead, the noble ronin at the castle's doorstep has a more damning revelation about his relationship to the pitiable young man. Kobayashi's Harakiri is vivid, violent, and harsh, with an aim for calling out hypocrisy yet exists largely for generating empathy and is always utterly compelling, unfolding in a serpentine and novelistic fashion. Nakadai is excellent as the principled and vengeful warrior.
**** out of **** 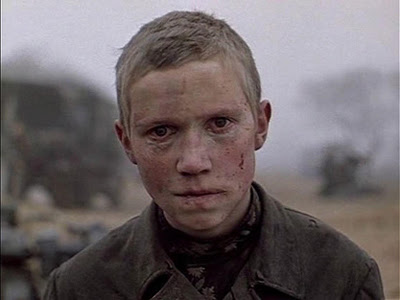 In Belarus in the heart of World War II and the German occupation, a teenager fights with the Russian Resistance, sees his family slaughtered, and bears witness to the unspeakable Nazi atrocities all around him. Harrowing,  nightmarish and occasionally consuming, Elem Klimov's Come and See is dense and murky, made with an impressively fluid camerawork though muddled photography, and contains the feel of an even more unrelentingly bleak Tarkovsky film with an ending that, depending how you interpret it, I'm not sure how useful it is.
*** out of ****

Seven Days in May 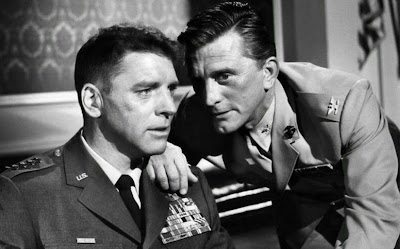 Disarmament talks between Russia and an unpopular President (Fredric March) leads to rumors of a military coup led by a military demagogue (Burt Lancaster) and uncovered by his top aide (Kirk Douglas). John Frankenheimer’s Seven Days in May is a well-made, credible, and talky thriller that lacks suspense with the acting being the real attribute on display. Stars Douglas and Lancaster, though providing stalwart performances, are both relegated somewhat with supporters March and Edmund O’Brien stepping in with terrific turns.
*** out of **** 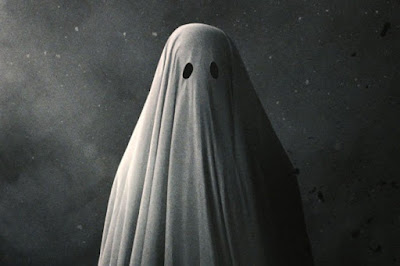 A musician (Casey Affleck) is killed in a car accident and, as a specter in a bedsheet with two eyeholes poked out, continues to haunt the house where he and his wife (Rooney Mara) lived through past, present, and future. David Lowery's A Ghost Story is pretentious, plotless, and self-satisfied filmmaking that tries to trick the audience into thinking that slow tracking shots and close-ups accompanied by sonorous chords equate to deep, meaningful art.
* out of ****