A century after the founders of a coastal fishing village thwarted a harbor bound ship, plunging all of its leprosy plagued shipmates to their demise, a dense haze carrying the ghosts of the victims envelops the village, seeking a bloody retribution on all of the guilty's remaining descendants. John Carpenter's The Fog is a relentlessly stupid ghost story, but well made and with some genuine scares that help offset other cheesed-out elements of the production.
** 1/2 out of **** 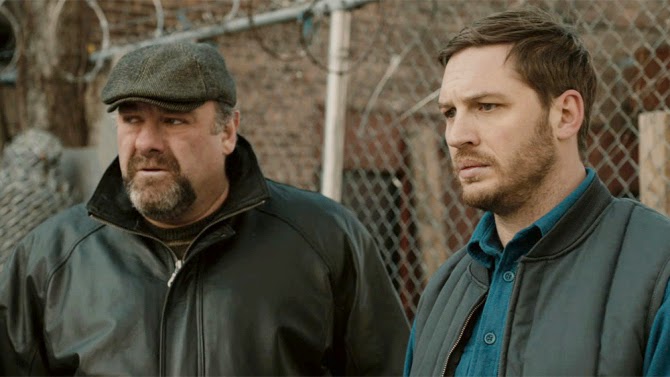 A simpleton (Tom Hardy) tends bar for his oafish cousin's (James Gandolfini) hole in the wall establishment which fronts as a drop site for laundered mob money, along with several similar locations in its Brooklyn neighborhood. When a staged robbery attracts the attention of both law enforcement and the pub's Russian mafia backers, the barkeep must play a delicate balancing act while simultaneously dealing with a psychopath (Matthias Schoenaerts) who threatens both his new lady friend (Noomi Rapace) and recently acquired pit bull. From a short story and screenplay from Dennis Lehane, who leaves the streets of Boston but tries to salvage much of his material that worked in past successes (Mystic River, Gone Baby Gone), The Drop is at once a gritty crime story, a romantic comedy, and underdog story that shows promise for a spell but ultimately suffers from its tonal identity crisis, awkward dialogue, plotting and stylistic choices, and a laughable villainous presence from Schoenaerts. Tom Hardy's performance is a highlight and departure from his usual offerings and Rapace, John Ortiz, and James Gandolfini (in his final performance) do their best with underdeveloped characters.
** 1/2 out of **** 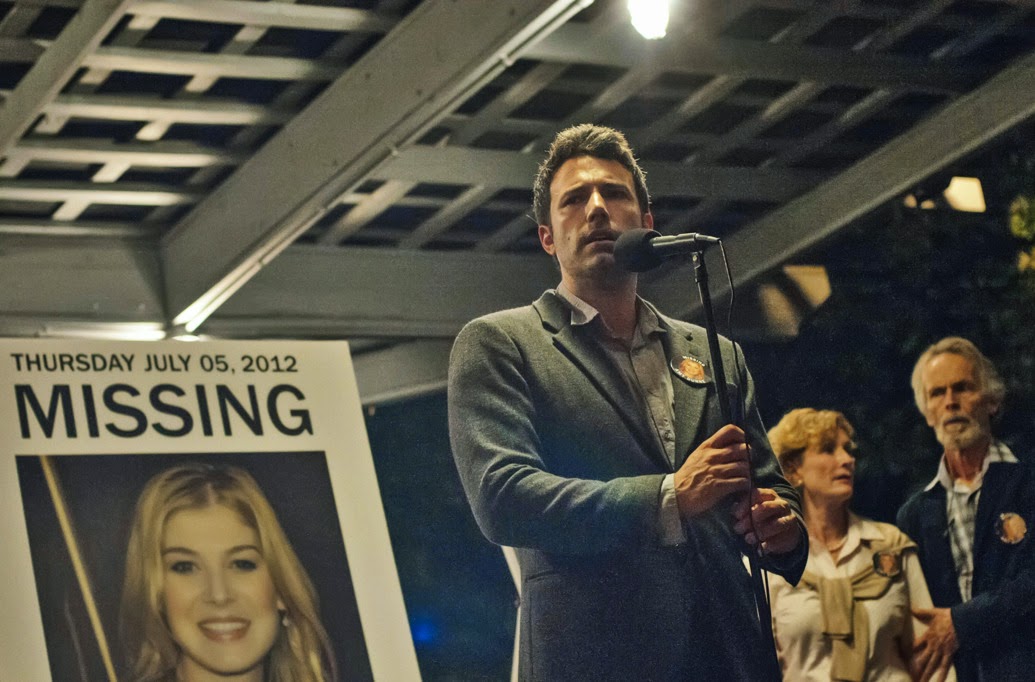 An easygoing, unemployed writer (Ben Affleck), recently moved back to his suburban Missouri home from the big city and living off the fruit of his cold, famed wife's (Rosamund Pike) trust fund, ventures out one morning and returns to find her vanished with only a few scant clues remaining. As the investigation heats up and takes on national media attention, he becomes the central suspect in the case, while passages from his wife's diary offer insight into their complicated marriage and hints as to what happened in the time leading up to her disappearance. Adapted by Gillian Flynn from her own bestselling novel, Gone Girl is a serpentine, dressed up dime novel mystery that doesn't really warrant or benefit from David Fincher's stylish, trademarked treatment. Affleck and Pike are effective enough in their roles, but never really soar, and receive sturdy support from Kim Dickens as a lead investigator, Carrie Coon as Affleck's concerned twin sister, Neil Patrick Harris as Pike's creepy and successful stalker, and Tyler Perry, surprisingly, as a high profile attorney who takes on the case. Despite my issues with the material and also the fact that its twists aren't as shocking as many would lead you to believe, Gone Girl still makes cogent points on marriage and media manipulation, contains several memorable sequences (a wildly bloody one in particular I still can't get out of my head), and thankfully opts for a meaningful, anticlimactic finale that may send you spouting profanities at the screen as it did several people at my screening.
** 1/2 out of ****