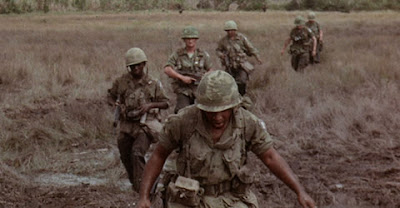 The veterans of the Vietnam War have long gone unappreciated, both due to the fact that they were sent to fight an unnecessary conflict and as that conflict drew on, they were singled out as the problem by herds of cowardly protesters, the first time American soldiers had been lambasted by their own in history. "Vietnam in HD" is the war's perspective from those who fought it. Compiled from soldier's footage sought in a massive search, and replete with interviewees who fought the battle in all different forms (and even one who turned against the war), this feels like a thorough and often harrowing account. Narrated by Michael C. Hall (an excellent narrator), "Vietnam in HD" is a high point for their series program. Perhaps because it is composed entirely of original footage, the recreations that mar most of their other documentaries are not present. The Vietnam era (and the preceding Kennedy Assassination and subsequent Watergate scandal) were not good times for this country, and the veterans of that war often received the brunt of our dissatisfaction."Vietnam in HD" is at least a minor chance for some of those men to set the record straight, and let us catch a glimpse of their heroic service to our country.
Here's a brief synopsis of each of the six parts in the series:
The Beginning (1964-1965)
After a Civil War in Vietnam with Chinese and the Russians claiming the northern half, Americans were sent in as advisers to South Vietnam for fear of the spread of communism. When the Viet Cong shelled American ships of its coast, President Johnson and Congress passed the Golf of Tonkin resolution, sending troops into Vietnam in a defensive role. After another vicious Viet Cong attack, the U.S. went on the offensive and initiated its first barrage, which was successful, although at the cost of over 200 American lives.
Search and Destroy (1966-1967)
The U.S. decides body count, not land, will determine victory in the Vietnam War and begins a tour to root out the Viet Cong in South Vietnam, who do not wear uniforms and blend in seamlessly with local villagers. The U.S. wins another battle in the taking of Hill 875, but the victory proves costly and ultimately futile.
The Tet Offensive (1968)
During the ceasfire of the Vietnamese Tet holiday, the North Vietnamese Army launched a coordinated attack on South Vietnamese villages and military bases. Although the U.S. forces were able to push back invading forces and win the crucial battle of Khe Sanh, the Tet Offensive was a turning point in the war, mostly because Americans back home could view the graphic images on their nightly news programs. With the war and his administration in chaos, President Johnson announces he will not seek reelection.
An Endless War (1968-1969)
As the increasingly unpopular war escalates, the U.S. engages in a bloody battle to take a North Vietnamese rendez-vous point known as Hamburger Hill. This siege will lead to a piece in Life Magazine which, along with frustration over now President Nixon's undelivered peace promises, inflames the protest movement and, for the first time in American history, places soldiers as the target of protesters.
A Changing War (1969-1970)
Nixon begins the Vietnamization process to turn the war over to the South Vietnamese while the protest movement continues to intensify at home. With peace talks stalling, Nixon jumps at an opportunity to invade Cambodia, but stops short for fear of spreading the war, rendering the mission mostly ineffectual. The shootings at Kent State mark a day of sorrow as the push to end of the war augments.
Peace with Honor (1971-1975)
The U.S. tests out the Vietnamization process with a mission to destroy strongholds in Laos led almost entirely bout the South Vietnamese, which fails miserably, but is spun as a success by President Nixon. Peace talks continue to falter but troops are with continually withdrawn. In 1973, the Paris Peace Treaty is signed, all the troops are brought home, shortly followed by the POWs. As news attention shifts from southeast Asia to Watergate and Nixon's resignation, Saigon falls in 1975 as the communists take South Vietnam. The soldiers who perished are honored with the Vietnam Veterans Memorial which opened in 1982.