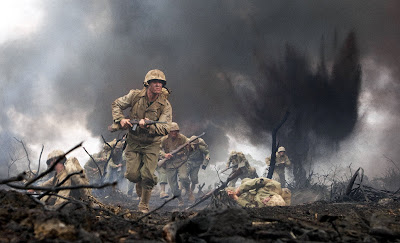 Through the eyes of three Marines, a long-term soldier, a cynical reporter, and a late enlistee we are given a window into the horrors of the the Pacific theater. From the jungle nightmare of Guadalcanal to the forgotten battle of Peleliu to the bloody excursions on Iwo Jima and Okinawa, "The Pacific" is a recreation of the brave and hazardous journey many young men took to protect the world from fascism. As a followup to the inimitable "Band of Brothers", "The Pacific" is somewhat of a letdown surprisingly, despite the lofty bar that has been set. Again produced by Steven Spielberg and Tom Hanks, and comprised of most of the filmmakers who developed the earlier series, "The Pacific" is a technical wonder and merits a recommendation on its look and battle sequences alone. However, and it pains me to say this, the three men chosen to represent the campaign, John Basilone, Bob Leckie, and Eugene Sledge, are not depicted as interesting as perhaps they deserve and are not played by actors who can do their characters justice. Also none one of the characters contain that existential, ethereal nature which made "BOB" so compelling, which is definitely strived for here. Despite misplaced focus and poor characterization, "The Pacific" is worth a look, if only for its technical marvels and to understand the debt we owe that generation.
Here is a synopsis of each of the ten parts of the series:
Part One - Guadalcanal/Leckie
Following the attacks on Pearl Harbor, the enlisted men learn the score of how it will be the Marine Corps that wins the war for the Allies. The following August, they are shipped to Guadalcanal in order to prevent the encroaching Japanese from reaching Australia, an Allied base. When American supply ships are overtaken and sunk off the coast of the island, the men are forced to defend themselves from scores of invading troops in an extremely bloody battle.
Part Two - Basilone
Surrounded, diseased, outnumbered, and starving on Guadalcanal, the Marines are reinforced by the own and an  outfit which helps defend from a Japanese invasion of a key airstrip.
Part Three - Melbourne
After the enduring trial that was Guadalcanal, the Marines are sent to recuperate in Melbourne, Australia where they are given a warm reception from the locals as the U.S. builds its forces to attack the Japanese stronghold in the Pacific. While on break, Private Leckie becomes involved with a local girl and her family while Sgt. Basilone is awarded the Medal of Honor and sent home to campaign for the sale of war bonds.
Part Four - Gloucester/Pavuvu/Banika
Reassigned to Intel, Leckie is stationed in Cape Gloucester in late 1943 where they battle not only the Japanese but also the savage conditions of the jungle. Soon they shipped to Pavuvu where Leckie suffers combat fatigue and is sent to a naval sanitarium of a brief stint, before being returned to his unit.
Part Five - Peleliu Landing
The Marines continue to train on the decrepit island of Pavuvu in the Solomon Islands, before being shipped to Peleliu for a violent assault to take an airstrip with the hopes of recapturing The Philippines from the Japanese.
Part Six - Peleliu Airfield
The battle of Peleliu is more deadly than expected, as untold numbers of Japanese line the caves of the island, and acceptable drinking water is nowhere to be found in the 110 degree heat. The man make a dangerous siege of an airfield, and Leckie is wounded and sent home.
Part Seven - Peleliu Hills
The marines undertake heavy gunfire and sustain many casualties before clearing the hills of Peleliu of an enemy that will not go quietly. Upon victory of the bloody and costly battle, they return to Pavuvu to rejuvenate for their next task.
Part Eight - Iwo Jima
Frustrated with selling war bonds, John Basilone requests a transfer and is sent to Fort Pendleton where he trains Marine recruits and romances and marries a corps nurse. Deciding to stay on when his enlistment is up, Basilone leads his men into battle and makes the ultimate sacrifice, as so many other brave men did on the sands of Iwo Jima.
Part Nine - Okinawa
The Marines endure a miserable and brutal month long campaign on Okinawa where the Japanese still refuse surrender and use civilians as decoys. As the men clear the island, the atomic bomb is dropped over Hiroshima, signaling the beginning of the end of the war.
Part Ten - Home
As victory in Japan is declared, the men return home and attempt to adjust to civilian life.