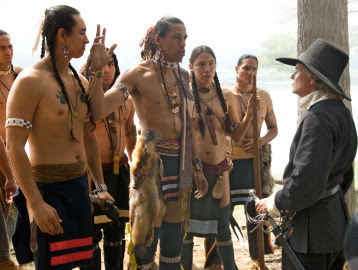 "We Shall Remain" takes over 450 years of Native American history, from the notion that Indians were complacent peace lovers or vicious savages, and turns it on its head. In a five part series, the main focal points include the arrival of the Puritans and the uneasy pact between them and the natives, King Philip's War, Indian relocation and Tecumseh's resistance, the Trail of Tears, Geronimo's campaign of terror, and the occupation of Wounded Knee. "We Shall Remain" is an excellent historical retrospective. Made by Native American filmmakers and featuring interviews with many current tribe members, the series has an authentic feel and tells its often harrowing story excellently, for once successfully using historical recreations to enhance the feature. "We Shall Remain" uncovers a shameful often watered down and sometimes even glorified part of our history and handles it with dignity and a quite superior craft.

Here's a synopsis of each of the five parts in the series:

Part I - After the Mayflower
In the winter of 1620-21 in what will come to be known as Plymouth, Massachusetts, dwindling Wampanoag Indians form an uneasy alliance with the cold and starving Puritans who have just landed on the continent. The trust will last for several years until an influx of Europeans disregard the arrangement, and the Euro-raised son of the tribal chief who first brokered peace wages what will become known as Philip's War, which will forever alter European-Indian relations.
Part II - Tecumseh's Vision
Following the Revolutionary War, the United States began to expand westward in an unjust land seizure policy spearheaded by President Thomas Jefferson. In 1805, following the visionary rebirth of his brother Tenskwatawa, Shawnee chief began his pan-Indian campaign and sought to rally all Native Americans to unite and fight as one. When another war between America and the British became imminent, Tecumseh bravely and brazenly confronted territorial General William Henry Harrison. After Tenskwatawa made an ill advised attack while Tecumseh was away gathering troops, the great warrior returned to made a valiant effort to fight the Americans, until he was forsaken by the defeated British and killed in the final battle of the War of 1812. Tecumesh's Vision died with him and it became clear that the new United States held no future for the Indians.
Part III - Trail of Tears
After exhausting many other methods in trying to keep their land, several tribes most notably being the southeastern Cherokee adopted a policy of assimilation. Under the leadership of Chief Ridge, his son John, John Ross, the tribe navigated the legal system to protect their Cherokee nation, even winning a Supreme Court judgement which stated the state of Georgia could not wrest the land from them. Blatantly ignoring the treaty, President Andrew Jackson urged Georgians to run the Cherokee off their land and when and rift developed between Ross and the Ridges, the great but disillusioned Chief and his son signed the land over in a treaty. Soon, despite Ross's best efforts, the tribal members would be forcibly removed and placed on what would be known as the Trail of Tears, a deathly trek from Georgia to Oklahoma that left 4,000 of their people dead. It would take 30 more years of turmoil and bitterness for the Cherokees to take hold of their new land and once again form a great nation.
Part IV - Geronimo
As Manifest Destiny became a reality, all of the Indian tribes had given up the fight and relocated to the reservations, except for the Apache Chiricahuans. Led by the brazen, proud, and brutal Geronimo, his band of outlaws terrorized white settlers and eluded capture for years, becoming an archenemy of the white America and polarizing his own people, and soon to become a mythical symbol of the Old West.
Part V - Wounded Knee
In February 1971 in South Dakota on the border of Nebraska, a caravan of over 200 Native Americans seized and occupied the buildings at Wounded Knee and began a 71 day siege, seeking the enforcement of broken treaties and the ousting of a corrupt tribal chief. The incident raised awareness of Indian causes which had lay dormant for half a century.