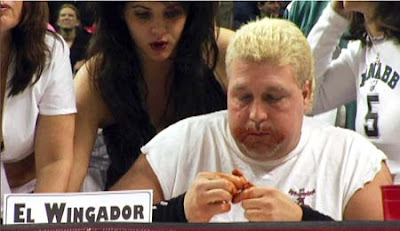 I came across a short film from Errol Morris recently entitled "El Wingador" and was once again taken by the idiosyncratic documentarian that I decided to watch two of his other shorts I hadn't seen and create a posting about them. Morris, and the immediacy provided by his self created Interrotron camera, is one of the most hypnotic and engaging of filmmakers, having crafted such intriguing works such as "Gates of Heaven", "The Thin Blue Line", and "The Fog of War." With the three I've included here, "El Wingador", "The Umbrella", and "Survivors" we are given brief must immensely entertaining pieces on a food eating champion, a Kennedy assassination chronicler, and cancer survivors. As with all his films, Morris looks deep into the heart of his subjects and elicits deep, personal, and often profound responses. You can watch all three of these shorts at the following links or YouTube posts: