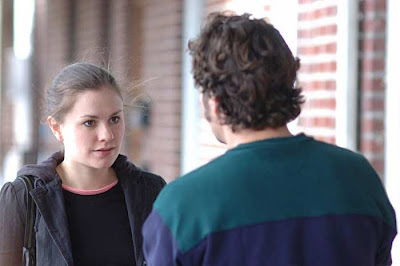 4/8/12 A cheeky and intelligent teenager (Anna Paquin), living in a high rise flat with her stage actress mother (J. Smith-Cameron) and attending an esteemed private school with Manhattan's elite, feels guilty for the death of a woman (Allison Janney) hit by a bus she was flagging down. Having had a spiritual connections with the stranger in her dying moments and in trying to fit the tragedy in with her ideal world view, the teen reverses her initial story told to the police and attempts to hold the bus driver (Mark Ruffalo) pays for his transgression, a crusade that she doesn't care who it affects. "Margaret", based on a poem entitled "Spring and Fall" by Gerlad Manley Hopkins, is ambitious, literate, and incredibly well realized filmmaking from playwright Kenneth Lonergan who wonderfully captures New York City shortly after 9/11 and captures and explores many of the attitudes in that time frame. In addition to the main storyline featuring a nicely tweaked performance from Paquin, Lonergan juggles a different and sweet storyline featuring J. Smith-Cameron as Paquin's mom who embarks on a romance with an exceedingly charming Jean Reno. Matt Damon, Ruffalo, Matthew Broderick, and Lonergan himself also have excellent and often humorous supporting roles. "Margaret" strives to achieve a series of lofty goals, and carries them off with style, wit, and gusto.

11/25/12 I watched the extended version (which totals over three hours) of this excellent and troubled film (it spent over six years in post-production) and found it just as fine, if not superior to the theatrical version. It contains many new humorous and well approached scenes, in addition to more protracted shots of the city coupled with operatic overtones and muted eavesdropping on its anonymous inhabitants, all of which abets the the films. Once more, I appreciated the work of Paquin, Smith-Cameron, and the many fine supporting players.