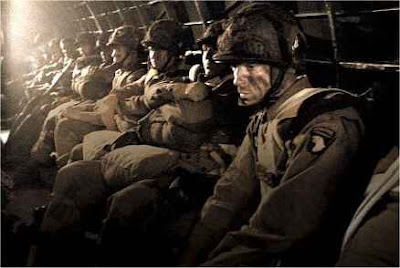 When the entered World War II, many of the young enlistees had not even heard of the paratroopers, a relatively new Army unit with an extraordinarily high causality rate. "Band of Brothers" follows the brave members of Easy Company, who volunteered for the paratrooper regiment in the 101st Airborne. From their drop into , through the horrific of the Bulge, to the capture of Hitler's Eagles Nest, "BOB" follows the men who fought, were wounded, and died in service from their country. Adapted from the book by Stephen Ambrose in a 10-part miniseries produced by Steven Spielberg and Tom Hanks, is the story as told by the men themselves, who also appear in each section in extremely poignant interviews. The film is impeccably shot, in a similar format to Spielberg's "Saving Private Ryan" and the men's individual stories are harrowing and moving as well. In a sea of impressive performances, a few stand out: Damian Lewis as Maj. Winters, a born leader and true soldier who seems to have a somber, existential quality about him. Ron Livingston as the cynical, alcoholic Capt. Nixon. Donnie Wahlberg as the stoic Lt. Lipton who shares the same leadership qualities as Maj. Winters. "Band of Brothers" is one of the most vivid historical recreations I've seen, and with the present day footage of the heroic company men, it is also one of the most affecting.
Here is a brief synopsis of each of the ten episodes:
Part One - Currahee
As the members of 101st Airborne prepare for the D-Day Invasion, two of the officers think back on their time in training at under a tyrannical, effective yet battle weary drill sergeant.
Part Two - Day of Days
After a chaotic jump into , a depleted Easy Company makes an assault on a pivotal German garrison on .
Part Three - Carentan
Two days after the D-Day invasion, Easy Company is sent to take the town of , a key link between and beaches. After the bloody they take a nearby hill to prevent a counterattack. Keeping the front lines through the end of the month, the company returns to for some much needed and short-lived rest.
Part Four - Replacements
With reserves sent to replace the departed paratroopers, Easy Company is deployed deep into occupied where they are sent to liberate a small Dutch village and secure a road which will provided British tanks passage over The Rhine into . Sustaining many casualties and forced to retreat, Operation Market-Garden fails and The Allies must find another way into .
Part Five - Crossroads
While preparing for a rescue mission of British offers trapped in , the newly promoted Executive Officer Winters writes a report on a successful siege of a German occupied dike. While taking a needed furlough in , an unequipped Easy Company is soon recalled to defend a threatened stronghold in , in the freezing .
Part Six -
Easy Company celebrates the Christmas holiday dug in their foxholes in the forest weathering the extreme cold while medics scramble for supplies. As the Germans attempt their siege of , the unit holds their ground until General Patton and his men break the lines and swing The Battle of the Bulge towards the Allies.
Part Seven - The Breaking Point
Still in The Ardennes and suppressing the Bulge, Easy Company deals with the severe cold, German shelling, the loss of men, and impotent leadership. Clearing the forest around Foy, they take the heavily fortified town and the depleted company moves on to their next mission in .
Part Eight - The Last Patrol
Stationed in the Alsatian town of on the German border, signs of the war's end are clear, which makes the worn men all the more battle weary. After a pointless patrol into enemy territory with the goal of POW capture results in the loss of another company man, recently promoted Major Winters disobeys another patrol order and orders his men to rest.
Part Nine - Why We Fight
Now stationed in with the war winding down, Easy Company is dispatched to the to suppress a last ditch German assault. On a routine patrol, they stumble upon a death camp abandoned by its guards and regard it in disbelief as food and water relief is rushed in and reports of similar finds come piling in. After Hitler blows his head off in a bunker, the company moves out to , the Fuhrer's former home and headquarters.
Part Ten - Points
As Easy Company takes the picturesque Nazi compound in the Bavarian Alps and Hitler's fortress The Eagle's Nest, victory in is declared. Waiting deployment orders to the Pacific, the new found leisure mixed with alcohol leads to more deadly results for the unit. However, the Japanese soon surrender and the men of Easy Company are sent home after their long, tumultuous, and heroic journey.