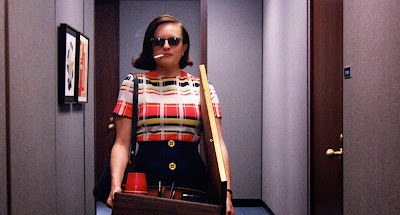 As the 60s fade and the 70s are ushered in, Don stares down another failed marriage, termination from his partnership, and his continuing, wayward calling existential crisis as SC&P faces consolidation into advertising juggernaut McCann Erickson. The final season of Mad Men travels down its own path, moving at its own speed, unconcerned with sensationalism, histrionics and easy resolutions, and providing its characters with deserving, surprisingly uncynical, and even tender endings. While so many shows seem to lose steam, spinning their wheels long after ideas or interest has run out, Matthew Weiner’s unprecedented series remained continually assured, surprising, intelligent, and engaging, a glowing example of how good television can be.
**** out of **** 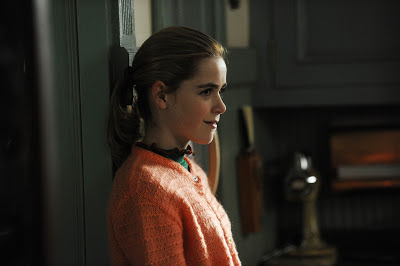 It is a tumultuous 1968 and Sterling Cooper Draper Pryce finds itself chasing several major accounts while being party to a major merger. Pete Campbell finds himself several outrageous entanglements, one involving his mother and a new mystery man at the agency. Peggy finds her stock rising, yet still subject to the whims of the male colleagues, and Don continues his tumble into the abyss, engaging in a tryst with a neighbor that results in what may be his ultimate low point. What can be said about Mad Men that hasn't already been said. This latest season is a continuation of excellence that hasn't wavered since its foundation. All the excellent elements (acting, story, production values, etc.) are still intact and the addition of James Wolk playing Bob Benson, another charming, alliteratively named abstruse ad man adds some more fun to the proceedings. Watching this season, I realized how nice it is to be able to watch a show without worrying about its quality, knowing it will be great, and sitting back to enjoy the fall.
**** out of **** 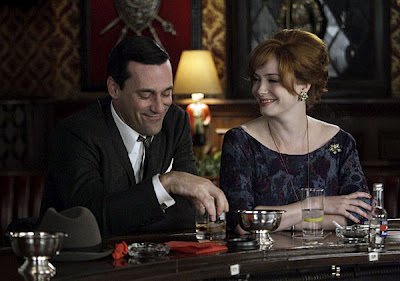 Its 1966 and Sterling Cooper Draper Pryce has, quite quickly, revealed the monster it has become and how its depravity knows no bounds in the efforts seal a Jaguar clientele. Don continues his surprisingly faithful and seemingly empty marriage to Megan, Roger trips on LSD, Pete pursues an acquaintance's fragile spouse, Peggy reaches the end of her rope, as does Lane in a more literal sense following financial straits. After a long wait, the most brilliant series on television returns with a dark and brutal season as the audience along with the characters seem to get kicked in the teeth on a weekly basis. From the larger happenings discussed above to smaller ones, such as Paul Kinsey's pathetic return to Betty's weight problems, the sense of melancholy and longing seems deeper than ever. The cast is excellent once again. I liked where they took Peggy and Joan's stories this year, and Jared Harris was remarkable in where he was able to take his character throughout his run. In Season 5, Matthew Weiner gets closer to the heart (or lack thereof) of his characters and involves us once more in a sad and sinuous journey.
**** out of **** 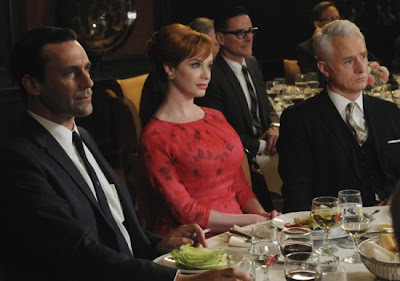 1964 is coming to a close and Sterling, Cooper, Draper, and Pryce is struggling to take off. After bungling an interview with the New York Times, recently divorced Don Draper begins a decline where he sees the death of his friend in California, struggles with his drinking, and faces more problems with his secret identity. Peggy, Pete, and Joan face discontent at work while Roger's attitude towards a major client may just bring down the entire agency. Season 4 of Mad Men is a continuance of excellence for a show that started off wonderful and somehow seems to constantly get better. The regulars shine as bright as ever and there are some humorous new additions to the cast including a couple of buffoons in creative and an ambitious executive at a rival agency. Season 4 helps prove that television can be literate and entertaining at the same time and that most other shows aren't even trying.
**** out of **** 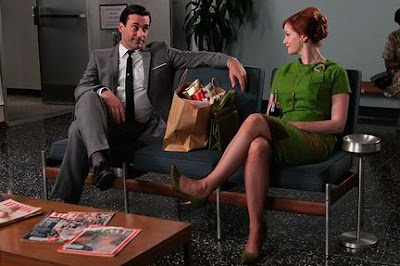 It's 1963 and the Brits have invaded Sterling Cooper. Shaking up management and making changes throughout the company, Pete Campbell and Ken Cosgrove are thrown into competition for the Account Manager Position. Don has acquired the desirable Hilton account but it may be more trouble than its worth. On the home front, his father-in-law comes to live with his family, a new baby has arrived, and an older gentlemen causes Betty to rethink their continually troubled union. Then, that sad fateful day in late November arrives when the world stops and reflects on the great tragedy that has befallen them. Season 3 of Mad Men continues the elegant melancholic brilliance that was established in the first two seasons. With pacing that is both leisurely and thoroughly exciting, Mad Men keeps raising the bar for television excellence. Matthew Weiner and his staff keep writing wonderful dialogue and situations and all the great actors, lead by the enigmatic John Hamm continue to wow as well.
**** out of **** 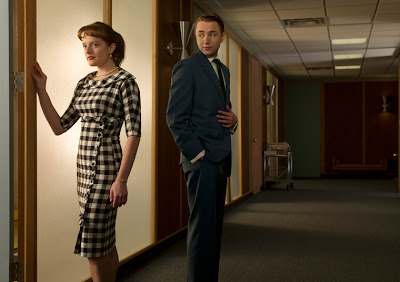 The second season of Mad Men picks up in the smoky and booze filled corridors of Sterling Cooper in the spring of 1962 with historical moon orbits, devastating plane crashes, high profile celebrity suicides, and the threat of nuclear war on the loom. As for the members of Sterling Cooper, a new executive will offer lofty promises, cost a tenured and liked exec his job, and possibly jeopardize the entire company for the sake of self promotion. Peggy Olson's career has skyrocketed while in her free time she reflects on the repercussions of her surprise pregnancy and has made the acquaintance of a young visiting priest. Ms. Halloway has become happily engaged but is somewhat discontented with her role at the office. Harry Crane has been made the head of the newly formed television department, Paul Kinsey has become involved in social activism with his new girlfriend, and Pete Campbell has found a way to capitalize on a family tragedy while struggling to conceive a child with his wife. Don Draper's affair with an older woman will lead to a separation from his wife, serve as an inspiration for boss Roger Sterling to leave his, and cause Don to head to California to do some soul searching which may lead to some answers regarding his mysterious past. Mad Men continues its excellency with wonderfully realized storylines and dialogue, while getting to the core of the discontent of its characters who seemingly have everything but who are still somehow empty.
**** out of **** 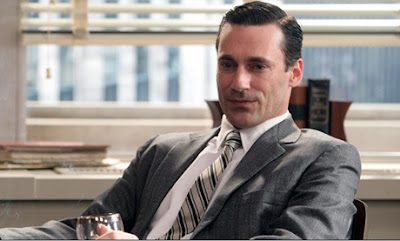 "How could anyone be unhappy with all of this"
So says Don Draper, the debonair advertising executive for Sterling Cooper, one of the most successful firms on Madison Avenue. Yet under the surface of the characters on Mad Men, the brilliant series by Matthew Weiner, lies a melancholy and a desire for something other than the items they superficially promote. With the smell of change in the air, Sterling Cooper's executives are something of a dying breed as they drink, smoke, engage in infidelities, and occasionally put in some work hours and draw in clients while the women wish to succeed on their own but seem hopelessly dependent on men in a male dominated world. At the top sits Draper (Jon Hamm), a natural at his job and a good family man as well. Regardless, his beautiful wife (January Jones) seems unhappy, has childish tendencies, and has recently been placed in psychotherapy. He doesn't seem contented, and sees his way into the arms of a Greenwich village woman (Rosemarie DeWitt) who hangs around beatniks. Also, developments occur that suggest that he may not be who he says he is. Then there is Peggy Olson (Elisabeth Moss) the perky and intelligent secretary with greater ambitions but seems to fall prey to the advances of Pete Campbell (Vincent Kartheiser), the snaky junior executive who will stop at nothing for self-advancement. Overseeing are the partners Roger Sterling (John Slattery) and Bertram Cooper (Robert Morse), the former more concerned with boozing and womanizing and the latter a pragmatist and seemingly straight and narrow kind of guy. Mad Men is a show that is intimately familiar with its time and setting, and it shows in the resulting period detail. The actors are wonderfully cast and believable in their roles. It is brilliantly conceived and intelligently written and sets the bar for what primetime television should be.
**** out of ****