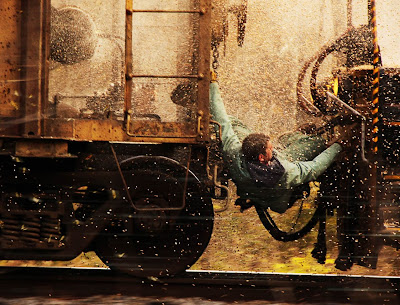 From "The General" to "The Lady Vanishes", "Silver Streak" to "Murder on the Orient Express", and "Runaway Train" (the best of the lot) to "Transsiberian" I have always been a sucker for films dealing with trains and Unstoppable is a film that seems to know its trains. It tells the story of a 1/2 mile steamer that gets set on the loose due to "bad luck and human error." After several failed rescue attempts, the prevention of the trains derailment lies in the hands of a young conductor and an engineer on the verge of retirement. I liked how the film used a lot of train jargon that was hard to follow, and only cued us in on the basic need to know. I loved the how the setting of the film, based on a true story, was rural and we get to watch the locomotive zoom through the foothills of the . I am also fond of the cast as well: Denzel being Denzel (a compliment, not an insult) playing the old engineer, Chris Pine of the recent Star Trek, the lovely Rosario Dawson in command at the control center. I also think this is a major success for Tony Scott, an action director whose films often suffer from over-the-top and unnecessary visuals as well as stupid supporting characters. Here all his characters click, and the real star is the train itself and his camera beautifully and crisply captures it as it races towards impending doom.