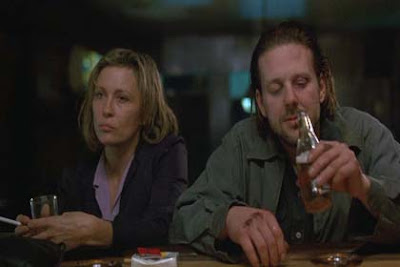 Some people wallow in poverty, misery, and alcoholism. Henry Chianski thrives in them. Fighting shallow bartendeners for drinks in the local dives and jotting down an occasional inspired thought in his cramped, squalid apartment, Henry is curiously amused and seemingly content with his situation and condition. He only expresses discontent when he is taken to the nice side of town and tempted with opulence ("no one who could ever write worth a damn ever 'wrote in peace'"). Barfly tells the story of a couple days in Henry's life, and stars Mickey Rourke who takes a risk and plays him as a hunchbracked Brandolike goon who stomps around and overdelivers his lines. The result is a likable character that I found amusing. Faye Dunaway also delivers a fine performance as a boozy woman that takes him in. Written by Charles Bukowski (Chianski is his alter-ego, also played by Matt Dillion in Factotum), the dialogue is brilliant at points and although the film rambles, it is entirely likable throughout.
***