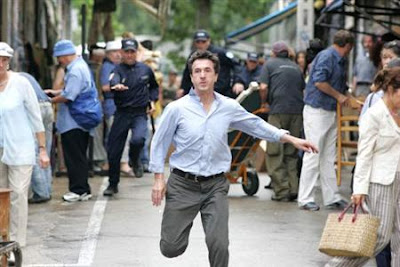 Tell No One is a French film, adapted from an American novel, and succeeds as a thriller, mystery, and chase film. Jam packed with plot and characters, with a likable enough lead character, Tell No One will have you forgiving its plot holes and contrivances. Its story involves a pediatrician who lost his wife eight years earlier. Although her murder was pinned on a serial killer, the circumstances surrounding her death were murky, and the police have always suspected the good doctor of foul play. Now, two bodies have turned up near his summer home (also where his wife was killed) and he is again a suspect. Also he has received a mysterious email that has implications that his wife may still be alive and well. The film is handled slickly and the visuals are exciting. Though developments and plot twists may leave you scratching your head, this is still a thriller that delivers.
***