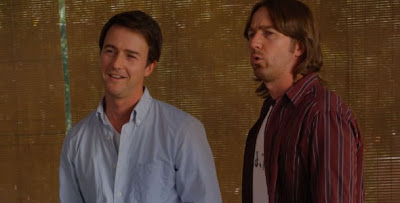 When thinking of great performances by actors in multiple roles throughout the history of cinema, Lee Marvin (Cat Ballou), Peter Sellers (Dr. Strangelove), and Nicholas Cage (Adaptation) come to mind. Now you can add Edward Norton to the list for his performance(s) in Tim Blake Nelson's Leaves of Grass. He plays twin brothers from Oklahoma who couldn't be any more different. Bill is a respected philosophy professor at a New England college. Brady is a pot dealer trying to go straight on account of his girlfriend being pregnant with their child. And, as is the case in the movies when anyone wants to go straight, there's somebody who wants to bring them back in. So when a Jewish druglord won't let him out on account of a debt, Brady concocts a scheme that will bring his estranged brother back home to Oklahoma and relieve him of his debt to the druglord. Despite the use of unnecessarily violent scenes, Leaves of Grass (also the title of a Walt Whitman collection of poems) plays kind of brilliantly as it blends styles and its characters philosophize is their own way. I was turned off at first by Norton's performance as the redneck brother, but soon both of his roles prove excellent, and Leaves of Grass ends up being a worthy film.
***1/2