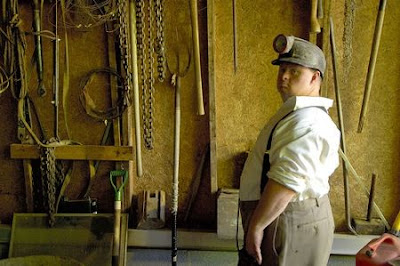 When I was volunteering, I was told that the shorts programs were the most popular screenings at the festival. So, I was fortunate enough to be able to attend the 8th set of the Independent Shorts Program today. It was a nice mix of different kinds of shorts, including live-action, documentary, and animated, and also ranging among different types of tones. Here are brief individual reviews of each short in this program:
Down In Number 5
The first short of the program is also probably the best. It tells the story of a dying man's efforts to secure a future for his disabled son. It is exquisitely filmed and heart-wrenching. ***1/2
Cricket
Cricket is a mercifully brief Japanimated short. **
When I'm Not Alone
This is also a wonderful short, a documentary about a woman who was abused so bad and so long that she thinks she is a man. However, it is not a weepy film that makes you feel sorry for the person, but rather an uplifting story about succeeding despite obstacles. ***1/2
Banana Bread
Short tells about an overprotective, hypochondriac mother who continually nags her grown son on the cell phone, though he has a secret she should be worried about. Funny short, though the joke begins to wear thin. ***
Winter Fugue
This finely realized short tells the story of a young woman who's inventor father has recently died and left his New York apartment a mess for her to clean before selling it. However, her father may have one last surprise up his sleeve. ***1/2
Helpless
Helpless takes place in a police station and recalls an incident from several different point of views. Certain elements in this short irritated me but at the same time I enjoy these kind of exercises. ***
The Shopkeeper (Dukandar)
Indian film tells the story of a mischievous boy with a vivid imagination who is given the task of watching his father's shop during a crucial cricket game. This one didn't really work for me, but it had its moments. **1/2
I Want To Spend The Rest Of My Life With You
Very short short is darkly humorous as a destined couple meet. ***