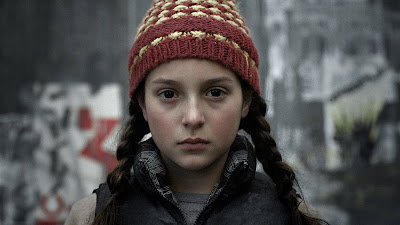 The Jury Awards worked the same way, except that they awarded more films. We were again shown seven shorts, and I was a little disappointed with some of the selections, though there were some good ones. These films are eligible for Oscar contention and I placed an asterix after ones not screened. Here are the reviews:
Alma*
Lost and Found*
Home
Home is a surprisingly bland and empty short made with home photographs and having to do with the aftermath of Hurricane Katrina. **
The Devil's Wedding
Devil's Wedding is a darkly comic, well-written, and disturbing short about Satan getting hitched. ***
Get Happy*
Claiming The Title: Gay Olympics On Trial*
Ana's Playground
Well-made short about a girl risking her life to regain her lost soccer ball in a war zone neighborhood. ***1/2
We Were Twenty*
Cigarette Candy
Well made and well acted short about a Marine's homecoming just rings false. **1/2
After Tomorrow*
Beast
Again well-made but extremely convoluted Danish short about domestic abuse. **1/2
Expiration
Wonderfully conceived and executed short about the dangers of drinking expired milk ****
The Best Part Of My Day
Cute but long and obvious short. **1/2
Heal*
reviewed here **1/2
The Beauty Of Damage*
Winter Fugue*
reviewed here ***1/2