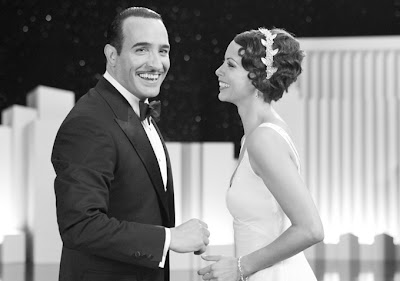 3/5/12 I must have been in a bad mood or had heightened expectations due to the hype surrounding it, but I caught "The Artist" again and found it to be a more enjoyable exercise (yes, it is still an exercise), highlighted by the delightful lead performances and the impressive direction of Michel Hazanavicius.


2/4/12 It's 1927 Hollywood and screen star George Valentin is at the height of his fame. Backstage at the premier of his latest silent hit, George celebrates with the producers, his bitchy wife/costar, and his beloved pet dog and also screen partner. However, the talkies are on their way which will spell career death for George. As his lifestyle takes a sharp decline, a young chorus girl whom he once showed kindness to begins her rise to fame and George must learn to swallow his pride when she attempts to return the favor. "The Artist" is this year's critical darling, having won audiences over at Cannes and now likely on the path to take the Oscars by storm. Made by director Michel Hazanavicius, and starring his wife Berenice Bejo and Jean Dujardin after their OSS 117 60s spy spoofs, the French team seems to be creating a niche at recreating past genre films. There are some wonderful sequences including an early tap scene between Bejo and Dujardin, a nightmare scene, and an operatic late revelation. Dujardin and Bejo are extremely charming in their roles and Americans actors such as John Goodman and James Cromwell play memorable parts also. Uggie the dog, who has made quite a name for himself lately in the talk circuit, is also quite a specimen. "The Artist" comes packaged with a lot of hype, which diminished the experience somewhat for me. I liked the film for what it was, a pleasant if not delightful exercise that honors and replicates past films, silent, talkie, black and white, and color alike ("Singin' in the Rain" and "A Star is Born" come to mind), but never really distinguishes itself as its own unique piece of work.