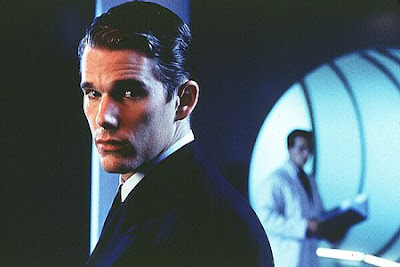 Gattaca opens with the setting posted on screen stating "In The Not So Distant Future" and we assume it is going to be a morality play of some sort. And so it is, and this particular one, the directorial debut of Andrew Niccol (who also serves as the writer), is about genetics and cloning. The film introduces to Vincent (Ethan Hawke), a natural born human in a world comprised mostly of genetically enhanced people. Vincent works as a janitor for Gattaca (it comprises the four letters that make up DNA) and dreams of going into space as one their explorers. Despite the fact that he is doggedly determined, he will never be allowed on the mission due to a heart defect. So, he decides to play himself off as a superior athlete (Jude Law) who has been crippled in a car crash, by using his genetic material to pass off as his own. Things go swimmingly for awhile: he meets a young counterpart (Uma Thurman) and is eventually assigned to go into space. This until the mission's director is murdered and things start to go awry. Gattaca is well acted and contains some nice performances from Hawke and the usually spectacular Law. It also and contains some nice, intense moments. However, it is extremely bland and does not contain enough flair to engage the audience effectively.
**1/2