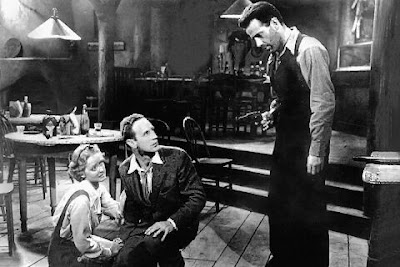 3/26/10 1936's The Petrified Forest marked the film that launched Humphrey Bogart's career and had him typecast, but it actually stars Bette Davis and Leslie Howard with Bogie in support. However, from the second he appears on screen as escaped convict Duke Mantee, Bogart is the whole show. The film is based on a stage play that both Howard and Bogart starred in and you can tell. The film does feel staged and stodgy, with soapy dialogue to go along. The film takes place almost entirely in a gas station and Arizona. Gabrielle (Davis), the granddaughter of the owner works at the counter and dreams of a more exciting life. Along comes an intellectual, suicidal drifter (Howard) and the two immediately fall in love. As the two bat eyes, the other members of the gas station read the newspaper which talks about the escape of notorious gangster Duke Mantee, so you know he will show up at the gas station and take its members hostage. However when he shows he brings the only breath of life into this dated film.

10/28/11 I enjoyed this film a little more watching it for a second time but still found it stagy, stodgy, preachy, and silly. Still director Archie Mayo's black and white direction and crisp, Bogart is excellent as the heavy, and Charley Grapewin is very amusingly as the drunk gangster worshipping grandfather.