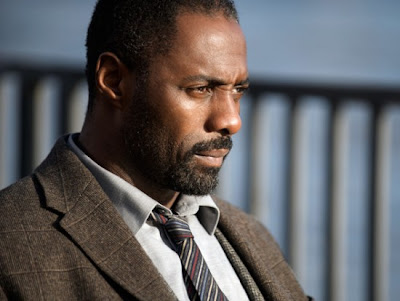 Season 4 (2015)
Laying low on a leave of absence on the British countryside, John is implored to return to duty when a psychopathic killer of cannibalistic proportions begins to terrorize London. The plotline of Luther's fourth and supposed final season is stupid, staid TV crime stuff, and a mysterious subplot is dubious at best, but Elba still retains his appeal and the remaining cast is fun to watch.
*** out of ****

Season 3 (2013)
With both a fetishist and a revenge killer on the rampage, you would think John has enough on his plate. In addition, the dogged Chief Inspector must also grapple with a bogus Internal Affairs investigation which has roped in both his girl and his best mate, and also with the return of a certain wily psychopathic ally. After a considerable decline in quality for its second season and after noticing that its third season had been slashed to a four measly one-hour long episode outing, I was ready to write Luther off as just another tiresome, spent police procedural. Then, after deciding against my better judgement and breezing through an admittedly exciting and thoroughly ridiculous series, I realized how grateful I was for a program that doesn't overstay its welcome as many have a tendency to do. Although most developments this season were absolutely ludicrous and most of the acting continued to be embarrassingly exaggerated, I was nonetheless taken once more by Idris Elba's still commanding performance, the show's high energy, involving storyline, and its merciful brevity.
*** out of ****


Season 2 (2011)
The fallout from the events surrounding Zoe's death have left everyone reeling, except for John who remains too valuable to the force. Now under the command of DCI Schenk, Luther must contend with a former suspects wayward daughter while dealing with several incomprehensible psychopaths, first an ingenious, historically minded killer and then a pair of identical twins playing their own fathomed game of mayhem. The second season of "Luther" isn't quite as compelling of the first largely due to the absence of Ruth Wilson (who appears briefly). The storyline which replaces hers, Luther's guardianship of a 13 year old prostitute played by Aimee-Ffion Edwards, isn't nearly as intriguing. Still, Idris Elba towers over the material and continues to make the series worthwhile.
*** out of ****

Season 1 (2010)
Detective Chief Inspector John Luther is the most brilliant minds on the London police force, making wild yet flawless deductions that would make Sherlock Holmes proud. He is also an unstable ticking time bomb, dealing with marital problems with his wife, a psychological examination and internal affairs inquest following the death of a suspect, and the advances of a like-minded and beautiful murder suspect he was unable put away. Like "Prime Suspect", another series about a British DCI, "Luther" is a splash in the face compared to banal American cop programs. Idris Elba ("The Wire") is outstanding as the troubled inspector, projecting sadness and inner turmoil as well as being engaging as a detective. There are many implausible developments on the show, not the least being Elba's relationship with serial murder suspect Ruth Wilson (who is good here), but I don't really think it matters because the show plays like good theater. "Luther" is an intelligently written series that like most good cop shows founded on a great lead performance.
*** 1/2 out of ****