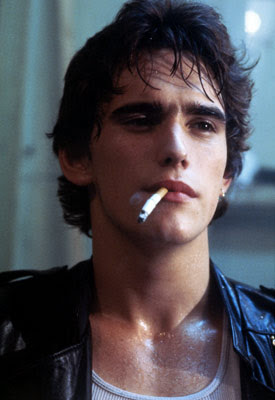 Most films about drugs, no matter how entertaining or successful, never really hit the nail on the head. By either glorifying or vilifying the users, most find them to be entertainments, yet not really successful as drug movies. Where Drugstore Cowboy stands out is that it is a drug movie that just observes, and never passes judgment on its junkie characters. The 1989 breakthrough hit not only for Matt Dillon but also for director Gus Van Sant is kind of a remarkable film in the way it handles its material. It focuses on Bob (Dillon) and his crew who go around robbing drugstores and getting high in 1971 Portland, Oregon. Bob is not your typical junkie. He is very intelligent, but puts his intelligence to use only to devise means to score more drugs and maintain his high. He also believes in lucky streaks and hexes, which may accurately describe a junkie's existence. There is a point where Bob decides to sober up, but it is not for the cliched reasons most movies offer, and Bob puts his reasoning for choosing sobriety so delicately to a counselor that paraphrasing it here wouldn't do justice. Drugstore Cowboy is a film that was a breakthrough for several talented artists, an early Indie classic, and a movie that gets drugs right.
***1/2