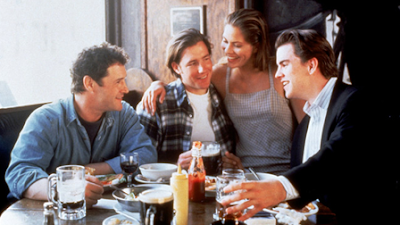 Three brothers with very different outlooks on life and women in particular all move under the same roof due to varying circumstances. Throughout the course of the film, the brothers will start, end, or perpetuate relationships while dealing with their own issues of commitments. The Brothers McMullen is Edward Burns directorial debut and it turns out to be another talky yet engaging 90s film. Also costarring, Burns is smug but also has a certain charm in the lead role. I also thought it was interesting to see an Irish Catholic perspective for once in a movie as well.
***