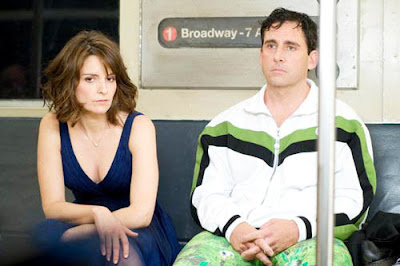 They say that the romantic comedy is dead in Hollywood, and although I do not venture to see entries in the genre often, Date Night would serve as proof. Here is a genuinely bad film from a limp and lazy screenplay, one of the worst I've seen in awhile. It is loaded with a slew of talented actors, but not one of them can save this dud. It's premise is that a bored New Jersey couple, played by the surprisingly unfunny Steve Carell and Tina Fey, goes out to the city for dinner at a swanky restaurant. They do not have reservations, are unable to get a table, so they decide to steal another couple's table. This leads to a night of mayhem which reignites their love. There is not one inspired moment in the movie, and this can be chalked up to an utter disappointment.
*1/2 star