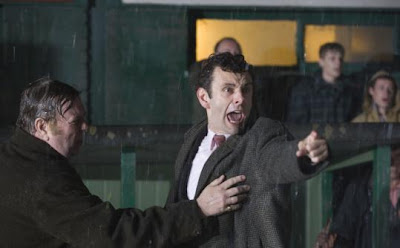 It is 1974 and Don Revie, the beloved coach of England's soccer team Leeds United, has just resigned to take a job as manager of Team England. He knows who his replacement should be, but the board sees it differently and decides to hire Brian Clough, Revie's arch rival. Clough is an arrogant, pompous arse who believes himself God's gift to soccer and uses his newly acquired position to settle scores. During his short reign as Leeds manager, we are shown flashbacks of the years leading up to Klough's hiring and the rivalry between him and Revie. Here is a sports movie with teeth. One that is not about "underdogs" or "giving it your best." Rather, it is about the ugly side of sport, the side that rarely gets displayed on celluloid. Clough is not a nice man, but he is an entertaining figure and it is a delightful to watch the gifted actor Michael Sheen slip into his shoes. It also doesn't hurt that the screenplay is by Peter Morgan-the great screenwriter of recent history as well as frequent Sheen collaborator. The Damned United is one the great overlooked films of 2009.
***1/2