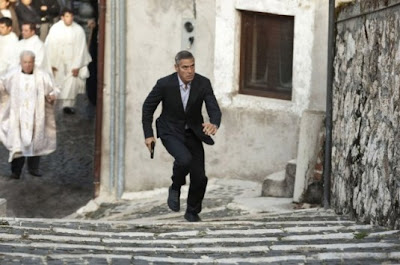 Jack (or maybe its Edward) is an assassin who lives life as reclusively as possible. Most people know very little about him and what he tells them about himself is usually lies. The woman he's currently with in a rural Swedish town clearly doesn't know who he is. After having to relocate to an Italian villa, he tells a local priest that he isn't good with machines, we soon learn that that is far from the truth. Later he visits a brothel and tells one of the girls that he is there to get pleasure, not give it, but we already know that that's a lie as well. George Clooney kicks off the fall season with a film that contains familiar elements that will probably be entirely unexpected to most viewers. The American is an exquisitely shot and languidly placed film where we experience entirely what the protagonist experiences. We see what he sees, get in his head, and soon his own paranoia soon becomes ours. Not everything is explained clearly because maybe he doesn't understand their repercussions as well. Clooney shows restraint, yet unexpectedly generates powerful emotions in key scenes. He is our premier film star, and continues to chose the very best projects. The American is a captivating film and by the time he starts running up that winding staircase we have confirmed that we are watching one of the best films of the year.
****