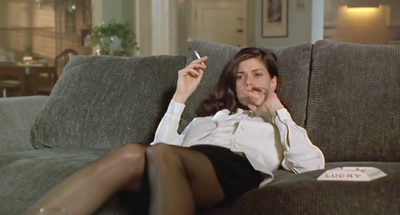 A sinister businesswoman (Linda Fiorentino) manipulates her bumbling doctor husband (Bill Pullman) into transacting a six figure pharmaceutical black market deal and then, while he showers after returning with the dough, makes off like a thief in the night. Taking it on the lam in upstate New York before she can begin her life anew in the big city, she quickly finds another pliable dolt (Peter Berg) with whom to hatch her next insidious scheme. "The Last Seduction" is a dark, ingeniously plotted, and stylish work from scripter Steve Barancik and director John Dahl, who seems to have more than a passing admiration for film noir, and whose movie bears more than a few similarities to noir classics old and new, such as "Double Indemnity" and "Body Heat". Among the icy femme fatales that dominate these and other films of the style, perhaps Fiorentino is the most malevolent, perhaps even more so than any villain in film history, with her total disdain for any semblance of morality surely to shock any viewer.