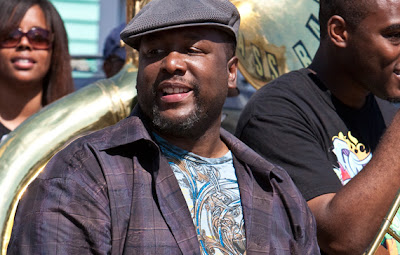 Season 4 (2013)
Over three years after the great tempest that almost toppled their fair city, the inhabitants of the 9th Ward celebrate the historic presidential election of 2008, deal with rampant corruption of their local government, prepare for another Mardi Gras, and face their continuing trials and sparse victories: Janette battles with her former partner for the use of her name while reuniting with a subdued Davis whose 40th birthday acts as an unlikely beckoning to maturity. LaDonna tries to get her bar back in order, Annie's musician perils continue, Toni and Terry see daylight in their lengthy fight for justice, and the community prepares a sendoff for one of its most revered members. After some major stumbles in its third season, Treme generally rights it ship and goes out on a high note, in the jubilant yet angry manner you would expect in this its final, abbreviated season. Some items worked soaringly well, Kim Dickens and Steve Zahn's stories and eventual linkup had a special poignancy to them and Clarke Peters and Rob Brown's journey continued to be the heart of the show (their characters alone would be able to carry a series), while other storylines continued to vex or took unfortunately disappointing turns (David Morse's One Good Cop subplot, Melissa Leo's unyielding quest for righteousness, Lucia Micarelli cliched music industry struggles). The series attempts a complete transformation for Wendell Pierce which they successfully achieved in The Wire but here seems forced but works nonetheless. Treme was an ambitious undertaking for series creators David Simon and Eric Overmyer and although it tended to get out of hand with its redundant sermons and often treated its charming cast as little more than mouthpieces for their political rhetoric, it is a spirited show which achieved its goals while showing off the best and worst of its city.
***

Season 3 (2012)
It is now September, 2007, another year removed from Katrina, but the inhabitants of NOLA continue to bear her effects as they try to get on with their lives: Jeanette (Kim Dickens) continues to dissuade anyone from wanting to enter the restaurant business, as a return home proves less than satisfactory as Davis (Steve Zahn) provides a similar caution against the music industry as he struggles to produce his "epic" opera. Toni (Melissa Leo) teams up with an investigative blogger (Chris Coy) as police harassment hits home and Terry  (David Morse) is given a Serpico-like plot, becoming a pariah in the Homicide Department. Big Chief (Clarke Peters) celebrates the release of the jazz CD with his son (Rob Brown), but receives some bad news which he shares with a new friend (Khandi Alexander) who is undergoing heartbreak of her own. Season 3  is where all of David Simon's sermonizing and blame casting finally begins to wear on the viewer's patience (at least on my own) and  mute some of the elements that it does exceedingly well. Characters who were once perched at the show's zenith, namely Zahn, Alexander, Leo, and Morse, now fall prey to wheel-spinning storylines, while others include Peters, Brown, Dickens, and Wendell Pierce (who unexpectedly endears himself much in the same way he did later on in "The Wire") continue to be compelling as does, of course, the music.
***

Season 2 (2011)
Season 2 picks up about one year following the storm, and the residents of NOLA and principals on the show are still struggling: Toni (Melissa Leo) is fighting to overcome a personal tragedy and the delinquency of her daughter (India Ennenga) while taking on a case involving an officer involved shooting, while Ladonna (Khandi Alexander) and Annie (Lucia Micarelli) face the horrors of urban violence. Batiste (Wendell Pierce), and Davis (Steve Zahn) face the trials of musicianship and band leading while Albert, surprisingly, embraces a musical partnership with his son (Rob Brown). The sophomore season of David Simon's lively series resumes with the same festive fervor that predominated the premier outing and made it such a rare joy. In some ways, Simon is more successful this time around because he has gotten past much of the preaching that slightly inhibited the first run, now allowing him to focus more on the elements that make this series great: namely acting, sensational photography, and of course, the music.
*** 1/2

Season 1 (2010)
Three months after Hurricane Katrina, the city of New Orleans and particularly the cultural district known as the Treme is reeling. As residents begin returning to their homes, they find obstacles in the form of weather damage, police and government obstruction, urban violence, national ignorance,  patronizing, and just general bad luck. As Mardi Gras approaches and the second line parades begin to form, the citizens of the Big Easy fight to restore their great American city. "Treme" is David Simon's followup to his acclaimed series "The Wire" and is not that far removed from that loving portrait of another American metropolis. Focusing on the stories of a few wide ranging individuals, from a woman (Khandi Alexander) and her attorney (Melissa Leo) searching for her incarcerated brother lost in the storm, to a struggling trumpet player (Wendell Pierce), to a trouble making activist (Steve Zahn) and his on again off again girlfriend/struggling restaurant owning girlfriend (Kim Dickens), master storyteller Simon is able tell a touching, angry, and sometimes overbearing story of The Crescent City. Additionally, each episode contains scores of wonderful and (assumedly) authentic New Orleans music. As for the performers, I really liked the work of Alexander, Clarke Peters as a headstrong local, and especially Zahn who gives a magnetic performance as a rapscallion activist. The series does have a tendency to preach and sometimes I have a hard time understanding its viewpoints. John Goodman's blowhard character states that a great city must speak for itself and through this series, for the most part, it does.
*** 1/2