So the Film Festival has returned to help us Clevelanders pull through this final resurgence of winter. Today was the first full day of films following Opening Night, as well as my first night back as a volunteer for a second straight year. While I tallied attendees, passed out and collected ballots, and ushered people to their seats, I was refreshed that festival season was upon us again as I overheard many film goers revel in the fine films they had seen. It was like music to my ears, even the occasional gripes about a stinker were good for a laugh. As the shift came to a close, and the final attendee was ushered to his seat at my theater before the lights dimmed, I settled into my seat to watch a midnight horror screening, a perfect end to my wonderful first day. 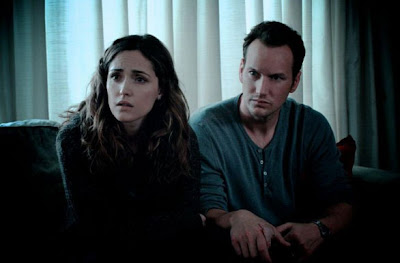 When I was growing up, and even when I was a little older than that, I always had a fear of people or something other than people creeping around the house at night as I lay sleep. Insidious is a film that understands this fear, plays upon it perfectly and for about the first half of its running time is a perfectly capable chiller. That is until it changes gears and decides it wants to be another, more campier movie altogether. The result isn't an entirely compromised film, just not as good a movie as it sets out to be. Directed by James Wan, who found success with the first Saw movie than wisely jumped ship, Insidious contains practically no gore at all and generates its scares in the old-fashioned, boo! sense. It tells the story of a young couple (Patrick Wilson and Rose Byrne) who have just moved into a new house with their three young children. One day one the boys is playing in the attic, when he falls off a ladder. Later that night he falls mysteriously into a coma, without any trace of brain damage. Three months later, as the boy lies in his bed at home still unconscious, strange things begin to happen and it appears that evil forces may haunt the house. At the wife's request, the family packs up and moves, but it may not be the house that's haunted at all. The main function of a horror movie is to scare people and make them squirm in their seats and occasionally leap out of them. That this movie achieves that end, though by means which may be unfair or contrived or both, is to its credit. I think the casting of solid performers such as Wilson and Byrne as well as Barbara Hershey in a supporting role as Wilson's mother also adds believability to the film. I also noticed that the medium the film was shot in, probably digital, makes the film look amateurish and almost the equivalent of watching a bootleg movie (not that I would know what that would look like). Insidious is an entertaining film good for a few scares, that had the potential to be a lot scarier if it would have decided what kind of a film it wanted to be.